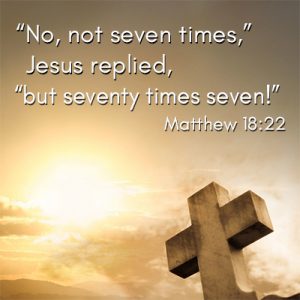 2. Forgive.
The word forgive is a relatively small word that rolls so easily off the tongue.  If you’ve been deeply wounded though, you know that the act of forgiving can be much harder.

My big brother was instrumental in my growth as a young Christian and once again he was the teacher of this lesson.

He and his wife were attending bible school at the time and he was excited about teaching me what they were learning.  I was a very eager student.

One day while visiting them during my school break, we were sitting in their living room when he said that he wanted to show me something.

He handed me a stack of 5 or 6 books and instructed me to hold the whole stack of them up against his back.

Then he started to walk.  First he walked slowly and then he walked faster and faster making unexpected turns around the furniture, all the while telling me not to drop the books!
When he stopped a minute or so later, I was out of breath and had no trouble admitting that it was difficult and tiring.

“That is what unforgiveness is like!” he said.  “If you refuse to forgive someone, that person can continue with life fairly unhindered. You are the one carrying the load and it will affect every other area of your life in some way.”

I got it!  It was a life changing moment for me.  It allowed me then, and in the years to come, to let go of things and at age 9, I already had my share of wounds and hurt to let go of, and wrongs to forgive.

Join me tomorrow for:  3. God has emotions.

For the things we have to learn before we can do them, we learn by doing them.