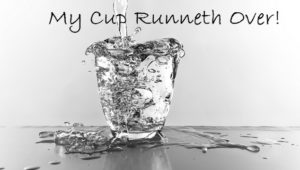 Logic says that if you have a glass of water and you pour some of the content out, you will be left with less than what you started with.  Jesus never handed us a glass though.  He said the water that He gives will become a well of water within, springing up into eternal life – John 4:14

I believe there are different ways of letting the rivers spill out.  The people in my own life that have had a real effect on my faith, like my brother, walked what they talked.  When I was young, the way my brother lived was such a contrast to everything else I was seeing, that it was obvious that something about him was different.  It was never what I heard that made me want to be a Christian, it was what I saw.  Once I had seen the difference in my brother’s life, then only did I really want to hear what he had to say.  It was his actionable faith that opened my ears.

There are times someone you know or meet will need to hear the word of God, and so it’s important to know the word, to know your Bible so that when you share with them, you are acting as a vessel for God, sharing HIS word.

At other times, they just need your help.  Help with moving, to look after their kids for a day, to mow their lawn or cook some meals for them if their family is going through trying times, to just sit and listen to them, etc.   My husband calls this boots on the ground faith: actually helping others in need, in addition to, and sometimes instead of just praying for them or giving them a scripture.

Sometimes it’s easier to tell someone you’ll pray for them, when what they actually need is your help.  It was Jesus himself that told us the parable of the good Samaritan.  (Luke 10:25-37)  The good Samaritan didn’t stop and pray for the wounded traveler.  He didn’t stop and witness to him.  He became proactive in bringing the traveler to safety.  Open yourself up to taking action for God, and you just might be the answer to someones prayers.

We can be that city on a hill that can’t be hidden in Matthew 5:14.  To put the lamp on the lamp-stand so that it can make light for everyone in the house.

I have a crazy busy weekend in front of me, getting stretched in several different directions with the kids events as well as other issues, so I won’t post the next one; I Can Do All Things, until next week.  Have a great weekend!! 😀

Every problem has a solution. You just have to be creative enough to find it.