The Bible says that the power of life and death is in the tongue. (Proverbs 18:21)  Of course the Bible has a lot to say about the words we speak and the power of our tongue.

I’m a practical girl, so I want to explore these Scriptures and how they apply to my life and family in a practical way.

My husband told me a story from when he was 13 years old.  He was at a large gathering of friends and family.  One of the guests was expecting a baby, and all the women were discussing possible baby names.  They mentioned one name in particular, and it was at that very moment that my husband decided to see if his foot would fit in his mouth.

“Oh, don’t name the baby that!  That name is so old fashioned and boring.”

The women became silent and it dawned on him that one of his cousins, who has that very same name, was silently sitting across the room from him.  Realising he’d made a terrible faux pas and wanting to undo the damage by trying to explain his statement, he pushed his foot even further into his mouth.

“No, no…it’s not that it’s boring……I just meant that you should just pick something more unique.”

Ugh!  He wanted the furniture to swallow him up.

Sometimes in an angry or emotional moment we may hurt someone intentionally with our words.  But at times we unintentionally let careless words fly, and they too have the power to cut.

Have you ever hurt someone with your tongue?  I know I have.   I know I’ve also been hurt by someone else’s tongue and I know you have too.

So where does that ridiculous saying come from – you know the one;

Sometimes I think wounds from sticks and stones heal long before the wounds from words hacking at your soul.

Proverbs 15:4   The soothing tongue is a tree of life, but a perverse tongue crushes the spirit. (NIV)

I was very little when I remember my dad first telling me that I was just like my mother.  It was probably the way he spat the words at me that made me realise that it wasn’t a good thing, and I wasn’t sure what I did that made him say that.  In years to come I learned it could mean anything from “you are being argumentative” to “you’re being a royal pain in the behind!”

My parents divorced when I was two and when my father spoke of my mother I could hear a world of anger and resentment in his voice.  It took me many years to realise that while those angry words were spoken to me, they were never really meant for me.

I’ve spent a lot of time considering what kind of parent I wanted to be with my own children, and one of the things that stood out was that I wanted my parenting to be intentional.

I didn’t want the lessons I teach my own kids to be thoughtless actions and mindless words that just happen to come out in the moment.   I wanted to consider how the things I say to them will impact them now, as well as in the future.

Bible Verses about the Tongue

My own father had already taught me that words had tremendous power, so I wasn’t too surprised when I came across Proverbs 18:20-21 for the first time and read that the power of death and life were in the tongue.

What did surprise me was verse 20 as well as the end of verse 21.

20 With the fruit of a man’s mouth his stomach will be satisfied; He will be satisfied with the product of his lips.
21 Death and life are in the power of the tongue,  And those who love it will eat its fruit.

Now it made sense to me that words had power, because they could build you up or they could break you down.

In my head that power had always been held by someone else.  When I read the rest of this scripture I realized that it didn’t have to be that way.  As a child, I felt I had little power.  But now, as an informed adult, I knew better.  That my own words had power over me, and to those I spoke to.

The question was; what was I doing with that power?

If I would be filled with the fruit of my lips, what kind of fruit were my lips bearing?  Were they bearing good fruit, positive things into my own and my loved one’s lives?  Or was I speaking death…. or maybe even just negativity into our lives?

Jesus said that it’s not what goes into a man’s mouth that makes him unclean, but what comes out of his mouth.
Out of the abundance of the heart the mouth speaks. (Luke 6:45) Whatever your heart is full of is likely what is coming out of your mouth.

What we keep our thoughts busy with will fill our hearts and it will flow from our lips and we will eat the fruit that we speak.

It became very clear to me that I needed to speak life into my family and my marriage.  And so I went and found some of the promises that God gives us and started speaking them over my family.  After all, God says that His word will not return to Him empty but it will accomplish what He sent it out to do.

Isaiah 55:11  so is my word that goes out from my mouth: It will not return to me empty, but will accomplish what I desire and achieve the purpose for which I sent it. (NIV)

Of course it isn’t always easy, we are all human and can make mistakes.  Sometimes we get frustrated or angry.  Sometimes we’re careless.  But I think the difference is in our intention; when we decide that we want to be the type of person that speaks positively.  To not just let our words be ruled by the emotions and circumstances we find ourselves in the moment.

James 1:26    Anyone who says he is a Christian but doesn’t control his sharp  tongue is just fooling himself, and his religion isn’t worth much. (TLB) 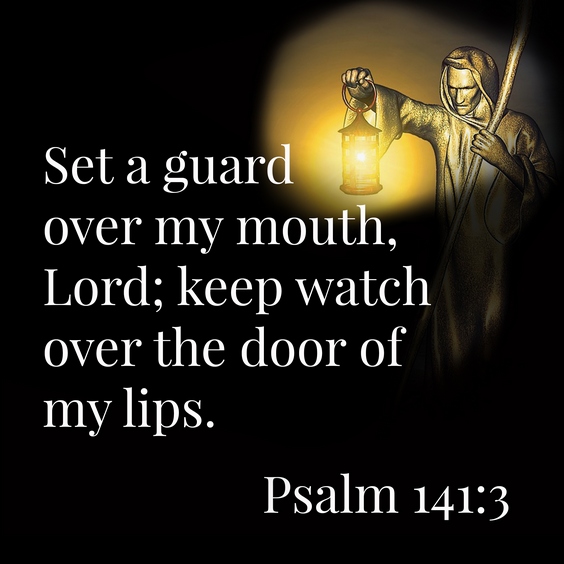 I went through a short phase in my early teens where I began using swear words a lot, because that was the kind of language I was hearing around me every day.  But one day, I listened to the way I was speaking, and I didn’t like it.  I didn’t want that kind of harsh language coming from my mouth.

Not because someone else thought it was bad or wrong.  But because I didn’t want any more negativity in my life than what I already had to deal with.
I didn’t say to myself – I really need to watch my language.  I stopped cursing, intentionally.

Romans 12:14  Bless those who persecute you; bless and do not curse.

Of course we are going to have days when the wrong words come out.  We aren’t perfect.  But my kids know me well, and I think they know that my intention is to parent them in a positive way and that I have their best interest at heart.

And I think that’s what God wants for all of us; for us to keep each other’s best interest in our hearts.  To fill our hearts with an abundance of good things so that what flows from our tongue will be full of life.

What you say is what you will get.
Speak life!

These aren’t the droids you’re looking for.