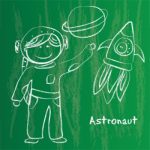 When I was a little girl, I dreamt of having a dollhouse.

It was a strange dream, because I wasn’t really all that fond of dolls.  I had them, played with them, but I always ended up outside, running around with my dog or pretending to be an astronaut walking on the moon. Tried as they may, those dolls just couldn’t hold my attention for very long.

I never did get a dollhouse when I was a child, but somehow my thing for dollhouses managed to stay with me.  And when my own daughter was about to turn five, I decided to buy her a dollhouse. I very quickly realized that they didn’t make the kind of dollhouse I was looking for, and that the dollhouses that were available were ridiculously expensive.

I decided to take matters into my own hands and build one. This was quite a leap from buying one, and maybe just a tad overambitious for a girl who, up until that point, had never actually built anything herself.

In my defense I’ll say this; growing up, I was the ‘spanner boy’ whenever my father was working on something.  Not because I didn’t have brothers, but because I was my dad’s goal in over-time. I was born really late in the game and by the time I came along, my older siblings had started leaving home, which meant that even though I wasn’t, I was sort of an only child.

When Dad had projects around the house, I inevitably ended up passing along the right tools and Dad made fixing things look easy.  I’m getting sidetracked though.  My point was that maybe this was where my bravado came from.  It was a dollhouse, how hard could it be? Right? 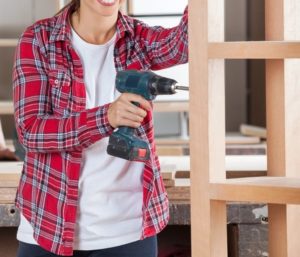 Armed with a few sketches and an idea, I ventured into the power tool section of my local hardware store and bought some tools.  At that time, my home was not a tool wielding house. I walked out of the hardware store with my purchases, beaming and excited about my project. I had the timber store cut my panels to size and headed home to create my masterpiece.

About 3 hours into the project the trouble began.  Things just didn’t want to fit where they were supposed to.  Eventually, I figured out what the problem was.  I’d switched two of the panels around and had to take everything apart and start over.

It still hadn’t occurred to me that I might not be able to do this by myself.  I had no plan B.

My little project started coming together and as it took shape it only served to make me even more ambitious.  Kitchens and bathrooms need tiles and living areas and bedrooms need carpet, so I went on an interior decorating shopping spree.

The dollhouse ended up with more than tiles and carpet.  I added wallpaper and little chandeliers and curtains for the windows and what good are chandeliers that don’t work?  So I added electricity. Even though I didn’t think of the possibility of electrocuting myself, I did think of making it safe for my daughter.  The wiring was all hidden away with tiny low voltage lights lighting up every room in her house.

The end result was a dollhouse almost as tall as I am.  It exceeded my expectations and I couldn’t wait for the big reveal on her birthday. 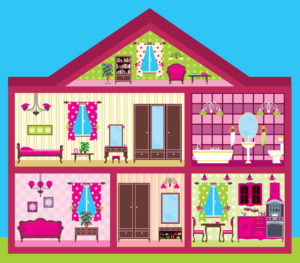 I’d spoken to her grandparents, and between her grandmother and aunts, every room was furnished.

The kitchen table even had little plates with pretend spaghetti bolognaise on. There was a living room, bedroom, bathroom and nursery.  When my one year old son decided to test the bathtub out by dumping his juice in it, I didn’t know whether to thank him or spank him.

Turns out I built a fairly waterproof bath and was able to get things cleaned up without much damage.

My daughter’s birthday came and she was thrilled with her dollhouse… at least for a little while.  Try as it might, that dollhouse with all its furnishings and occupants, just couldn’t hold her attention for very long.

It was something I’d never considered; my daughter was just like me and not really all that fond of dolls.  She had them, played with them, but always ended up playing outside.

My heart hurt for a while; after all, I poured a lot of loving effort into that project.  It took some time to admit to myself that the dream had been mine, not hers, and I had to let it go and let her be herself.

There are some things in life that children are just good at figuring out. One such thing is how to get attention. Even if it be negative attention.  Growing up I was no different.

Fortunately for me, though, I didn’t have to settle for negative attention.  I found that the easiest way to get my father’s attention was to get involved in his hobbies of choice.

I’ve decided that with my own children, I won’t make the same mistake.

A child’s aspirations may be formed and influenced in many ways.   So I’ll show them many of the things I know and am good at.  But I’ll let them develop their own passions and give them my attention because they deserve it, not because they do what I do.  And if they happen to develop a passion for what I’m passionate about, it won’t be because I didn’t give them any other choice.

There’ve been many times I wished that I’d at least taken some photos before I let the dream of the dollhouse go.  But for some reason I didn’t.  My niece was thrilled with all the furniture and dolls she inherited, but I never could let go of that house.

Building it taught me some valuable life lessons and it brought out my power-tool wielding side and I wish you could see me smile as I write this.  At the time, the dollhouse project seemed like a really big thing; using tools for the first time and discovering how to make something from scratch with my very own hands. It ended up being a stepping stone.

From being a child handing wrenches to my father, to the leap of eventually designing a floor plan, and managing the contractors and suppliers who built my own home, I’ve gained skills and confidence that go well beyond power tools. It’s empowering.  I’m not intimidated when a faucet starts to leak.  Sure, my husband may end up fixing it, but I know that I can too if I need to. 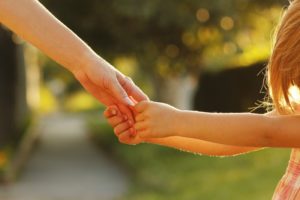 As for my children, I try to be their greatest fan, coach and supporter; at whatever they endeavor to do.  I try to recognize their strengths and interests, and give them opportunities and activities to explore and develop their interests.  I ask them what they like.  Then I let them talk.  They are in that wonderful process of self discovery, and their interests may change and develop over time.

Most importantly, I make sure that there’s never a reason for them to question how I feel about them.  My love, time and attention comes with no strings attached.  I hope to help instill in them a confidence that will empower them to take on whatever lies in their path.

As for the dollhouse…it’s found a second life as a tool cabinet in the garage.

Don’t tell me the sky’s the limit when there are footprints on the moon.