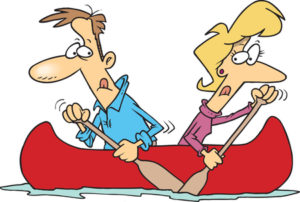 Several years ago the owner of a large construction company invited my husband and his friend/work associate to their annual Christmas party.  My husband and his friend had been involved in some projects with this company, and though the company did great work, they were sort of notorious for having a rather rough and tumble crew.   My husband’s friend, well aware of the crew’s reputation for being a bit rough around the edges, asked the owner;

“So what’s the proper attire to wear to your Christmas party?”

“Boxing gloves!”  Replied the owner without missing a beat.

There are all sorts of people with all sorts of personalities, and that’s wonderful; it makes for a fantastically interesting world.  But when conflict arises, differing personalities can bring real challenges to conflict resolution.  Some people seem to thrive when faced with confrontation.  Others, (like myself years ago), find confrontation to be very, very intimidating.

When my husband and I first got married, I thought that conflict ended relationships and had to be avoided at all cost.  My way of dealing with difficult situations was to quietly get upset, walk away and cry about it in private.  Later, when I had my emotions under control, I would reappear and pretend nothing was wrong and wait for whatever bothered me to blow over by itself.

When we had our first real argument, initially I clammed up and started crying.  The more my husband tried to get me to talk to him, the more I cried.  Eventually when I did start talking, I asked him if he now really regretted marrying me.

He was completely stunned.

“Just because I’m really angry right now, doesn’t mean I love you any less!  I love you enough and I care enough about our relationship to not leave things unresolved.”

It was my turn to be stunned.  It took some time to process what he was saying.  Avoiding conflict undermined our relationship.  If there were unresolved issues between us, they weren’t magically going to disappear.

Over the years, my husband and I have read several relationship books.  We found John Gottman’s book, Why Marriages Succeed or Fail, And How You Can Make Yours Last, quite interesting.   In it, the author states that there are three conflict resolution styles that couples in stable marriages tend to follow; 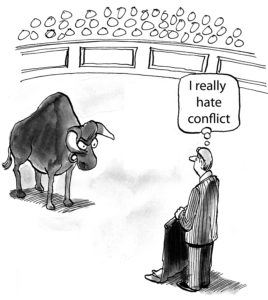 The author states that through years of counselling and research, he’s seen marriages successfully stay together using each conflict resolution style.

Early in my own marriage however, we didn’t fit into any of his specific categories, but were a mish mash of all three.   My husband leaned towards the validating style, but with a good pinch of passion when something big arose, especially if things started getting swept under the carpet.

In smooth relational waters, I too found myself happy and at ease within the validating style, as long as the issues were small and simple.  But when something big arose, or something bothered me that could potentially create problems, I would avoid conflict at all cost.  Real conflict terrified me.

After stunning my husband in the earlier confrontation, he said this;

“Look, if there’s something that’s bothering me, it’s going to come out, one way or another.  If we don’t talk about it, then it’s going to be in my head, grinding around for days and weeks, and it may grow into something bigger than it really is.”

“Leaving things unresolved can lead to resentment, anger, fear, or at the very least, anxiety.  That kind of negative stuff is going to have an effect on my day to day behavior and how I interact with you.  If you’re honest, I think you’ll agree that the same can be said for yourself.”

“So if it’s going to come out, let’s let it out in a controlled fashion.  And if I’m upset about something and you really think I’m wrong, I want you to tell me, and to tell me why you think so.  Then I’ll tell you why it’s important to me.  If I really am off base, then a discussion or argument or two will help set me straight.”

“But if the issue is real, even just to me, then the only way to get to some sort of solution is to get on a path that will lead to resolution.  Some of the conversations may be difficult.  There may be fireworks along the way.  We may not get everything figured out that day.  But so what?  As long as we both agree to stay on a path that leads to resolution, I think we’ll be okay.”

There’s something else we both agreed to as well; any of the emotions we feel are valid in the moment, even if we’re wrong or misinformed.  If I’m angry at my husband, he isn’t going to tell me to stop being angry.  If he’s really frustrated with me, I won’t tell him to get over it.

Whatever we’re feeling in the moment is very real to us within that moment.  Allowing each other to honestly express what we’re feeling, whatever it is, is very liberating.  In a strange way, it makes it safe to come to the confrontation table, knowing that my husband will allow me to be mad when I’m mad without making that the issue, or that I won’t tell him to get over it if he’s frustrated.

I can validate his emotional state by saying, I can see you’re really frustrated right now, tell me what’s going on in there.  Once we’ve had a chance to express or vent our emotions and position, to feel like we’ve been heard and understood, we’re in a much better place to talk openly and look for solutions.

While I still don’t like confrontations with my husband, I’m not afraid of high octane emotions anymore.  I recognize now that as long as they’re controlled, and given a chance for release, they’re just a step in the process.

We’ve also had several conversations over the years about being positional.  These have just been interesting conversations over coffee when the sailing is smooth.  I think many people are very quick to become defensive and positional when their position on a matter is challenged or a confrontation arises.

The problem is that the positional person often lets pride get in the way and they stop thinking constructively and become more concerned about being right.  Being positional is akin to; my way or the highway.  My husband and I like to look for win-win now.

It’s much better to be open minded with my husband, and at the very least, actually thoughtfully consider his point of view or what it must be like for him in that particular situation.  Sometimes it means agreeing to revisit an issue later, allowing time to process and think about what’s been said and been brought up.

Listen honey, I’ve given some thought to what you said earlier and while I’m not sure I’m really-

….comfortable with your idea,…

…..sure I understand where you’re coming from yet…

Hey Honey, I’ve had time to think.  You are totally right about that.  Let’s do it that way, but can we add……

In his book, John Gottman also talks about what he calls The Four Horsemen that can mark the downward disintegration of a relationship. 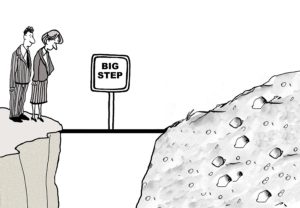 The author did have good news though.  He found that in successful relationships, even ones where there are at times contemptuous behaviours, as long as the balance between positive interactions and emotions within the relationship outweighed the negative, the relationship could not only survive, but thrive.

The ratio he found was 5 to 1.  Five times as much positive as negative.  I know my husband and I have that ratio beat by a long shot.  As our relationship has matured, our conflict resolution skills have really improved.  We still use a mish mash of all three confrontation styles.  We really don’t sweat the small stuff at all.  Most of the time we use a validating style that more resembles negotiation than confrontation.  But every once in a while, someone reminds me to ‘eat your vegetables’, and the boxing gloves come out.  ;p

I never dreamed about success. I worked for it.