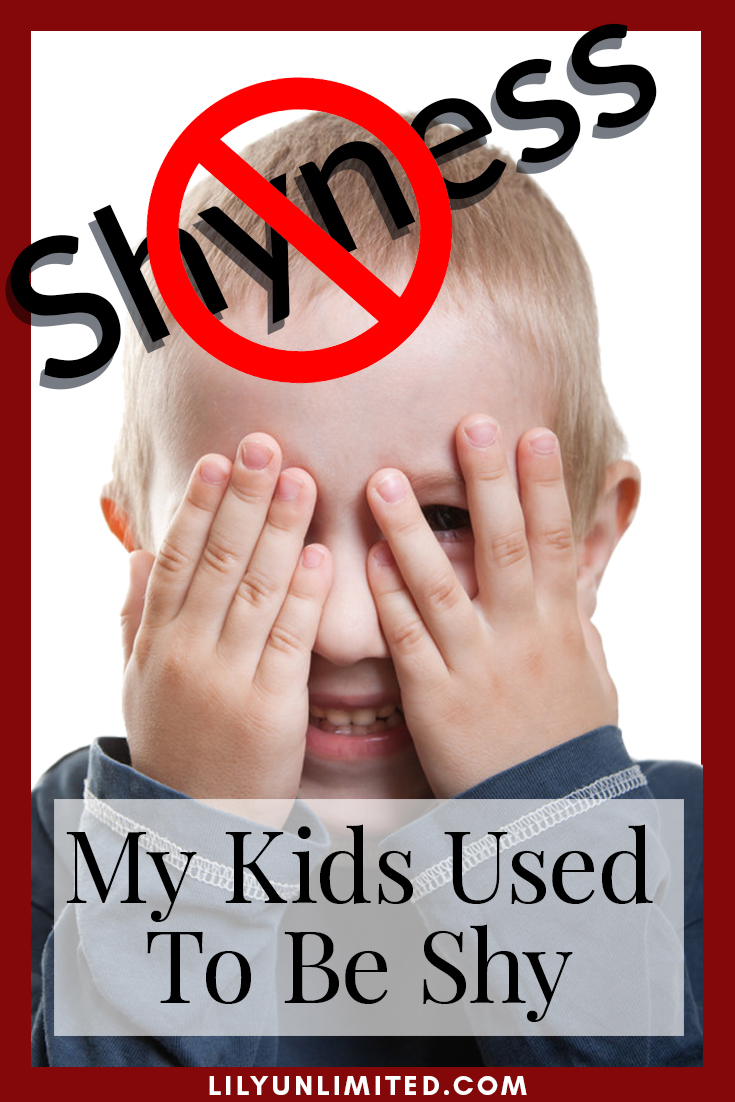 In a million years, no one that knows him now would ever guess that my son used to be painfully shy.  But when he was small, that’s exactly what he was.

He wouldn’t go near anyone that wasn’t within his close family comfort circle. Only those he was familiar with were allowed to hold or touch him.  He wouldn’t even allow unfamiliar relatives near him, and would turn his head and look away when they tried to speak to him.

I’ve noticed some parents sort of coddle their shy children when it comes to shy behaviour.  Maybe they’re worried that trying to correct their child’s shy behaviour will upset them even more, and the last thing they want to do is cause trauma to an already emotional child.

But I knew coddling that kind of behaviour in my children wouldn’t do them any good in the long term; it would only delay their personal and social development.  Over the years, I’ve had to nudge my kids out of their comfort zone to bring about the kind of behaviours that will help them excel in the future.

Overcoming Shyness By Stepping Outside The Comfort Zone

When you’re out of your comfort zone, you have two options; find somewhere to hide, or adapt and change.

Being out of your comfort zone is where the magic happens, it’s where growth occurs.  For children, not so far out that they can’t cope, but far enough out that they have to learn to overcome their fears and function on their own.

When my son was in the first grade; we entered him into a poetry recital where he could read any poem of his own choosing.  Our motivation was for him to have the opportunity to get used to speaking in front of other people.  It was a good first introduction to public speaking, as there wouldn’t be too many other people present.

Initially he was excited about the recital, but as the time came closer his fear and shyness overcame him, and he tried backing out.  I wouldn’t let him.

We told him that he’d already committed to the task and that he was going to see it through no matter what.  To help him feel more at ease, my husband even wrote him a fun little poem that was very personal and relatable to my son and his world.  We made it clear that we didn’t care about anything other than him having the courage to stand up and do what he set out to do.  How well he did was NOT important.  We had him practice in front of us at home, as well as for his older cousin and aunt and uncle too.

When the big day came, he jumped out of his seat, walked to the front of the classroom, rattled off his poem and ran back to his seat where I was waiting.  He was so relieved that it was over, but he beamed when he said: “I did it!”  I would present many similar challenges for him over the years to help him overcome his shyness and fear of people.

The first time we took him to summer camp, we sent him to a camp where none of his friends would be going.  Since none of his friends were going to be there, he’d have to make new ones when he got there.  The first day, as we got a tour of the camp site and where he would bunk at night, I could tell he was a bit nervous.  It was time for my husband and I to leave, but he wanted us to stay a little longer, and I could see some apprehension in his eyes.  We told him that if he had any problems, we were only a phone call away.

Then, a group of kids came by and shouted “We’re going to make a fort in the woods, wanna come?”
“Bye mom, bye dad” and he was gone.  No phone calls during the week, not even on the day he was stung by a dozen wasps.  But he had several new friends and all sorts of stories about their adventures.  Now when he has a summer camp or sports camp, he cannot wait to go.  And he’d much rather go on a bus with other kids than have his parents drop him off.  If he has friends along, great.  If not, he’ll make new ones on the bus. 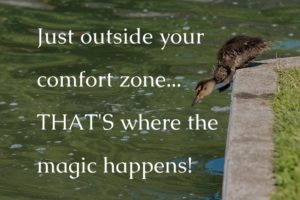 A few months ago he and some other students had to give a speech in front of his entire school.  He got the short straw and had to go first.  When I picked him up after school I asked him how it went. “My speech rocked!  Everyone cheered after.” he said. “I don’t even know what the big deal is about speaking in front of other people, it doesn’t bother me at all.”

Recently, we were having a conversation about choosing a high school for him next year.  Some of his friends and classmates at his current school are very concerned, they don’t want to go to a high school where they don’t have any friends.

He told his classmates; “Don’t worry so much, you’ll just make new friends”.

I’d taken him to a spend-a-day visit at a potential high school and watched him walk off into a crowd of hundreds of new kids.  I actually felt nervous for him.  He didn’t know a soul there.  When I picked him up later that afternoon, he’d made several new friends, and he brought them over to introduce them to me.

Later, I asked him how he makes new friends.  He said;

“Oh that’s easy, I walk into the crowd and look around for people who I think might be fun to hang around with.  Then I go and offer to shake their hand and say hi, my name is….”

Wow, he sure has come a long way.

My daughter was also painfully shy when she was very young.  One day when she was about six, we got to our butcher and I told her that she had to go and buy the meat.  I parked right in front of the door and assured her that she would be fine; that I was right there and that I could see her (and she me) the entire time.

At first she refused to get out of the car, but I firmly told her that we would go home without the meat if she didn’t go and we’d be without supper.   She finally mustered the courage, but ran back to the car a couple of times to make sure that she had my instructions right.  I wasn’t trying to be cruel, but I knew that the sooner I could help her break through her fear of facing people the better it would be for her in the future.

Her first poetry recital was so difficult for her that at first she couldn’t get a word out.  Two years later at 8 she played the lead in her school play and didn’t stumble over any of the many lines she had to memorize.  Even more, she had fun!  Today she’s a confident young woman that’s at ease in any social environment.

She’s not only confident in social settings, she really enjoys talking to people, young and old.  It’s been a long journey to get to this point, to get from a child that would hide behind me when I would meet someone at the mall, to the confident young woman she is today.

More recently, my son came to me because he was having problems with his smart phone.  ‘Well, you better call customer service and get it sorted out’  I replied.   I stayed within earshot, but was smiling at how well this 13 year old handled himself and his situation over the phone.

When he was a small child, I could have accepted that my son was just shy, and let him hide in his room when company came over.  I could have let my daughter remain intimidated by adults and adult conversation.  But that would do them no favors in the long run.  Sooner or later they would need to overcome their shyness.  That meant requiring them to do things that were safe, yet a step outside their comfort zone.  Once they become comfortable with the new step, I made them take another.

From the time they were very small, I have required certain standards from them in their interactions with others.   They must be gracious and polite.  When we meet people, I require that they make eye contact, shake hands and politely greet every person by their name.

“Hello Mr. Jones, it’s a pleasure to meet you.”

There are no exceptions.  They must greet the ‘unpopular’ kids with the same courtesy and manners as they do the popular kids.   I used to have to coax them to talk to the shy socially awkward kids in a social setting.  If you watch my daughter now, she seems to seek those kids out, trying to make them feel comfortable and at ease.

When we have guests at our home, our kids usually run off and play with our guests children.  But I also require that they must take some time to sit with the adults and participate in the conversation.  This was difficult for them when they were very young; at six years old they would say adult conversation is boring.

But I persisted, and made sure that when my children were sitting with the adults, they were included in the conversation.  Now my kids enjoy visiting with anyone, and have become lively conversationalists.

Initially, breaking their shy behavior was not easy.  I could see that it was, at times, a huge emotional leap for them. Even though I pushed them, they knew I was there to catch them if they fell.  Every time they stepped out of their comfort zone, they not only developed their social skills, they gained confidence and a willingness to challenge themselves.

Having outgoing, confident and well balanced children is as rewarding for me as it is for them.

Wherefore by their fruits ye shall know them.