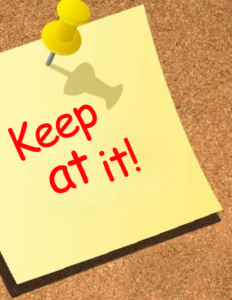 The other day I received a delightful text, which included an audio attachment.  The text was from my niece, and she’d sent me a recording of a piece she’s playing on the piano.  My niece is 26 years old now, and she’s packed a lot of interesting and eclectic things into her life thus far.   She’s an adventurer, has run the Comrades, is an excellent athlete and a fantastic artist and photographer.

She didn’t play the piano as a child, but a few years ago she became interested in learning, so she took lessons for about a year and a half.  After that, she just kept practicing and learning on her own at home.  Initially, she started with a small electric piano, but scince then, a friend of hers brought their piano to my niece’s home for her to use.  She loves to play in her spare time, and we love to listen to her.  I think it’s amazing and inspiring how far she’s progressed in such a short time.

A few years ago, my husband called me over to the monkey bars out in our yard.

Let’s do some pull ups, he said.

Yeah yeah, don’t worry about that.  He said.  Just jump up there and give it a go.

I really didn’t want to, especially not in front of him, but he wouldn’t relent, so I grabbed the bar and struggled to get 1 and ½ pull ups.

No, you did great, he replied.  Just jump up there again and give it another go.

Yeah yeah, don’t worry about that.  Just jump up there and I’ll hold your ankles and help you and you can do some assisted pull ups.

He wouldn’t take no for an answer, so up I went again, this time getting about 7 reps with his assistance.

The next set, he had me hold myself at the top with my chin even with the bar for as long as possible.  The set after that, he helped me to the top position, then had me lower myself half way down.

Ok, great.  Now hold yourself right there, for as long as possible.

Aaaaaah!!! My arms were shaking, and after 5 seconds I let go.

Perfect!  He said.  Now, every time you walk by the monkey bars, jump up there and do that again.  Push yourself; try to get an extra rep every time; even a partial rep is a victory.  When you do hanging holds, try to hold on for an extra second at the top, same thing when you’re half way down.   Soon you’ll start seeing progress.  If you stick with it, you’ll be doing pull ups and chin ups in no time.

I wasn’t sure about this plan of his.  I was getting into pretty good running shape, but all these push ups and new exercises he had me doing was uncharted waters for me.  But I was curious.  A fire had been lit inside.  I wasn’t sure if I could, but wanted to see if it was possible for me to do ten pull ups.

So I kept at it.  Usually when no one else was around.  Day after day, week after week.  1 and ½ reps soon turned into 4, then 7.  Whenever someone was close, I’d do some assited pullups so I could get some forced reps in.  When I could do 10 reps, I went and got my husband.

But I wasn’t done yet.  I kept at it.  Several months later I could do 25 non-stop pull ups.

It felt great, my kids were impressed, and my husband told me he was proud of how hard I’d worked.

Have you ever tried towel pull ups?

No, I can’t do those, my grip isn’t strong enough. I protested.

Yeah yeah, don’t worry about that.  Just come and grab this towel and give it a go.

I have a great relationship with my husband.  He tells me he sees things in me, like drive and perseverance.  I thought that was just my stubborn streak, but it sounds better when he calls it that.  And it’s motivating when someone believes in you.   Ten years ago, I never would have thought that I could do frog stands and hand stands, and pull ups.  That stuff seemed like it was for genetically gifted people who live in a gym.

It’s surprising what can happen when you step outside the box of beliefs you’ve given yourself, and try something new.  But trying isn’t enough.  If you want to accomplish something, then you have to keep at it.  You have to persevere even when you don’t feel like it and when you go through long periods where it seems you aren’t making any progress.  It doesn’t matter whether it’s pull ups, or piano, or becoming good at mathematics.  It really isn’t even about reaching the goal.  It’s about the process.  Stretching yourself, and reaching for a goal is very rewarding.

My husband’s been trying to teach me guitar for a while now.  That process hasn’t been going nearly as well as the pull ups did.  But it’s still fun trying.  And one of these days these sore finger tips are going to do what they’re supposed to, and I’ll be able to play along with my husband by the fire pit at night!

James 1
2 Consider it pure joy, my brothers and sisters, whenever you face trials of many kinds, 3 because you know that the testing of your faith produces perseverance. 4 Let perseverance finish its work so that you may be mature and complete, not lacking anything. 12 Blessed is the one who perseveres under trial because, having stood the test, that person will receive the crown of life that the Lord has promised to those who love him.

My interest is in the future because I am going to spend the rest of my life there.