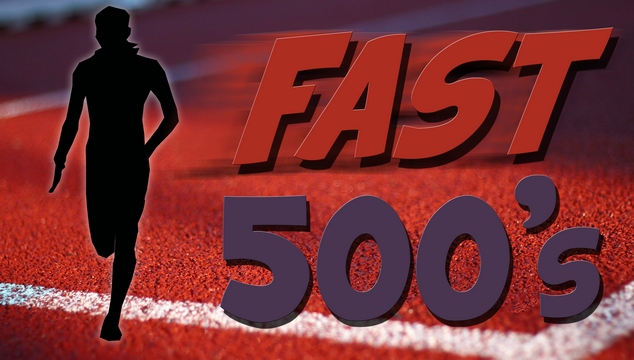 With the new year well underway, I’m pretty much back on track 😛 as far as training is concerned.   In an ideal world, I strength train twice a week and run three times a week.  The first running session is always speed work.  This could mean a dozen reps of short 80-100m sprints, or 400m sprints, or 5 or 6 reps of all out effort 1km runs, etc.  The second running session of the week is normally mid-distance; 4 to 6k.  It may include fartlek, speed form or tempo runs, etc.  The final run later in the week is normally something a bit longer, like a 10k.

My kids are both athletes and track season is in full swing right now, so they’re training hard.   To help them increase their VO2 max, my husband and I have been taking the kids out on weekends to do Fast 500’s.

We’ve been doing 500 meter runs for several years now, and there’s a few different ways we do them.  Sometimes we pick a hard, fast pace that we can maintain for the whole run, but lately, we’ve been going with sprint and hold on training.  Basically, we sprint the first 100 meters as hard as possible, as if it’s a 100 meter race, and then try to hold on and run as fast as possible for the remaining 400 meters.   The first time we did them in this new year, we did 7 reps with 6 min rest between.  The second week; 7 reps with 5 1/2 min rest between.  And this last workout was 7 reps with 5 min rest between each run.  Eventually there should only be 3 minutes rest between reps.

Let me just come out and say this: Fast 500’s are gross.  By no stretch of the imagination can I be convinced that they can ever be anything else.  Right now I’m not in shape for this particular workout.  On long distance runs, I vary my pace between 6min/km, (a comfortable speed where I feel like I can run all day) to 5min/km.  But Fast 500s are different.  After the first 100 meter all out sprint, I try to maintain a 3min30sec/km pace for the final 400 meters .  I get tired very quickly and my lungs start burning after the second one.

The thought of doing 7 of them, all as close to that pace as possible, makes my stomach turn before I’ve even started.  The thing is, the better shape you’re in, the harder you push yourself.  At least that’s the idea, so they always stay gross.

While I can see my times improving, I feel sick and cramped up sooner, because I’m able to increase my effort.  Why would anyone torture themselves like that?  The thing about Fast 500’s is that they’ve done more for increasing my V02 max and improving my 10km time than any other training.  And I’ve tried other methods; running further, hills, tempo runs over 2-6km distances, etc.  All of that helps, but nothing has shown me the gains of the 500’s.

We finished our 500 workout fairly early this morning so that we’d have the rest of the day for chores and some fun.  But later in the day, after the house and yard work was done, I still had some gas left in the tank, so I decided to do a sledge hammer workout, followed by a 30 minute 5k run.

I like to do these Fast 500’s with the kids for a few reasons.  One – my own lung capacity is not where I’d like it to be.  Two – I like to be able to gauge if the expectations I have of my kids regarding their competition and training is reasonable.  Three – We motivate each other.  The kids see their mom out there going hard, so they dig deep, and vice versa.

Finally, doing stuff with my children is always a blessing.  Now if it’ll stop raining for a day or two, I’ll be able to see them compete in two meets this week!

He that is without sin among you, let him cast the first stone at her.