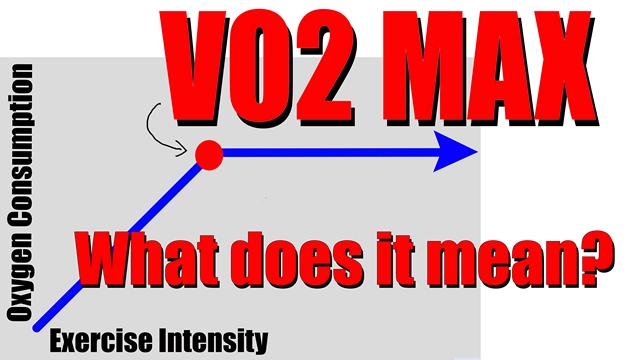 When you hear someone talk about their VO2 Max number, what they are really talking about is the efficiency of their lungs and cardiovascular system (to get more oxygen into the muscle cells), and how efficiently their muscle cells can convert oxygen and glucose into a fuel (ATP, or adenosine-triphosphate) that muscles can use while exercising.  In effect, measuring a person’s VO2 Max can be a way to measure someone’s fitness level.

As you exercise harder, more oxygen is needed to produce the energy required to sustain the effort.  The more efficient your lungs and cardiovascular system are (ie: the fitter you are), the more oxygen your body is able carry to your muscles and convert into energy.

The V stands for volume, and O2, of course stands for oxygen.  VO2 max is measured in millilitres of oxygen per Kg of bodyweight per minute, or, mL/kg/min.

So if my last VO2 max measurement was 52, then what that means is that my body is capable of consuming 52 millilitres of oxygen per kilogram of my bodyweight per minute.  Obviously, if an athlete can process more oxygen, they are going to be able to exercise harder for longer.  Age, gender, and body mass have an effect on the number.

But there is a threshold in which the lungs and body are not capable of further converting more oxygen, even when exercise load and intensity is increased.   When your body reaches this threshold, you have reached your VO2 max.

Much of your VO2 max capabilities are genetic; the size of your heart and lungs and how efficient they and your muscle cells are have a determining factor in your VO2 max number.  But we can also increase our VO2 max through proper exercise; some experts believe by as much as 5% to 20% (even 60% in rare cases).

In clinical VO2 max tests, the subject is tested on a treadmill with a ventilating mask attached over their mouth and nose.  The amount of O2 they use and carbon dioxide they expel is measured.  Of course, most of us don’t have access to that kind of equipment.  However, we can do various fitness tests (the multi stage fitness beep test, the cooper test, the balke test, etc), or by using our times from running races, and use the results from those fitness tests in VO2 max calculations to get a rough idea what our VO2 max is.

There are several other tests and methods and some online calculators that do the math for you.

Keeping track of your VO2 max number can be a useful barometer of what your fitness levels are.  If you’re just getting started out, then your numbers will likely increase dramatically with exercise.  If you’re an exercise enthusiast but you’ve been slacking off lately and you run a cooper test, you’ll likely find your VO2 max will have dropped.

Of course the numbers are all relative as well.  Where a middle aged sedentary person might have a VO2 max of 15 or 20, former Olympic cross country skier Bjørn Erlend Dæhlie’s VO2 max was measured at a whopping 90 in his prime!

Remember, always talk to your doctor before undertaking a fitness program or test!

If you just communicate, you can get by. But if you communicate skilfully, you can work miracles.